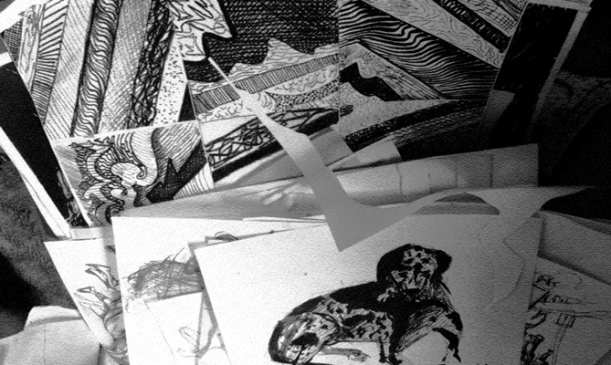 During the last couple of years I struggled with an issue which may be concerning many young artists:

WHAT SHALL I DO WITH ALL MY PAST SKETCHES, 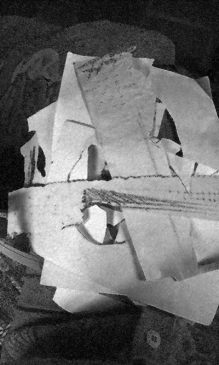 Many years ago the answer lied in the garbage,

but I realised one can never be certain whether

a tiny sketch is good at all, or extremely bad ?

I invite you to see two of the series of works made from such diverse sketches :

It took years until I could ‘sift’ my past drawings, while keeping them all in storage for future reference. Having the tendency to refer only to the quality of  a drawing, to its perceptual intensity, I had forgotten the importance of the memories which gave birth to all these sorts of life sketches. Although I’m generally more than happy to throw any object whatsoever, it became impossible to throw bits of myself filtered through drawing. END_OF_DOCUMENT_TOKEN_TO_BE_REPLACED

has its roots in the disgust caused by excessive intimacy with the self,  a self that doesn’t stand itself.

“realities of live being, that are rebuild every moment, that connect one day to the other, throwing bridges over gaps, over amorphous states and irretrievable absences”

The slightly shocking character (even for me) of these paintings does not seek to support the proclamations of Andre Breton, that

“beauty will be convulsive or will not be at all”,

instead itseeks to portray those remains of personal seizures, which – not without surprise – we discover that we share with everyone else. 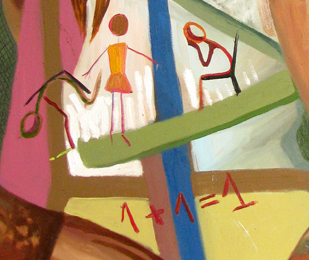 “Charlie Chaplin once told Jean Cocteau that after the film will be finished <<the tree must be shaken>> in order to keep only what remains on the branches”. (Rudolf Arnheim, “Art and visual perception”, own translation)
The “LUDUS” project was developed during 2009 in an effort to ignore, in relation to the aesthetics, this principle of parsimony. It is also evidence of a certain age in my painting, an age at which I will probably never return. Age at which we want to eat all the apples and never shake one tree. 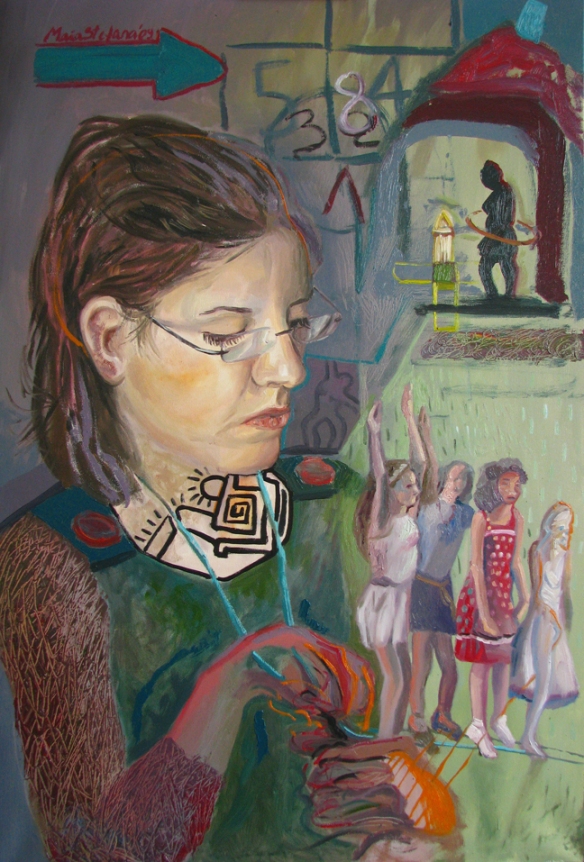 Ludus I, mixed technique on canvas, 60 x 90 cm, 2009, available for sale;
“Ludus I” has a more delicate story: I consider this work to lack “attendees”, because of its lack of chromatic “diplomacy”. What can I say? Nonsense. Aside from this, through “Ludus” I can speak, perhaps more autistic than in other works, of an age when you ‘fabricate’ childhood without ever realizing that you haven’t yet exhausted your own childhood…

Apparently a number of leading threads, of hidden stories, and yet no, the story never begins. In „Ludus” the only importance lies in the joy of storytelling. 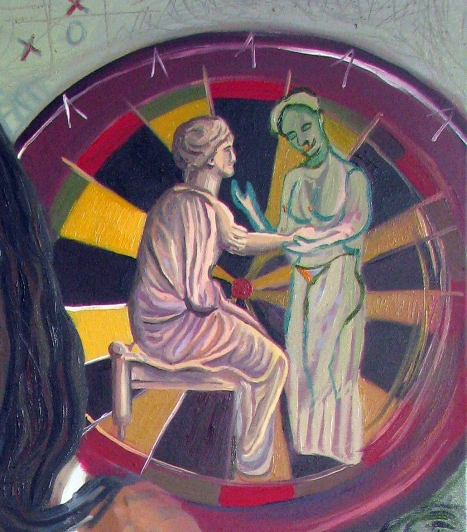 What unites these elements are precisely their differences in spatial planes, in artistic structure and in their intent of autonomy, thus generating a variety of irrational conflicts.

detail of Ludus I

As a mention, all these paintings have been realised after live models (including myself), and not after photographs. The models ranged from people I barely knew to friends I’ve known for a long time. During the painting sessions I have always asked them to talk a lot, thus their words highly influenced my figurative initial compositions. I thus consider these models to be secondary authors of these works. 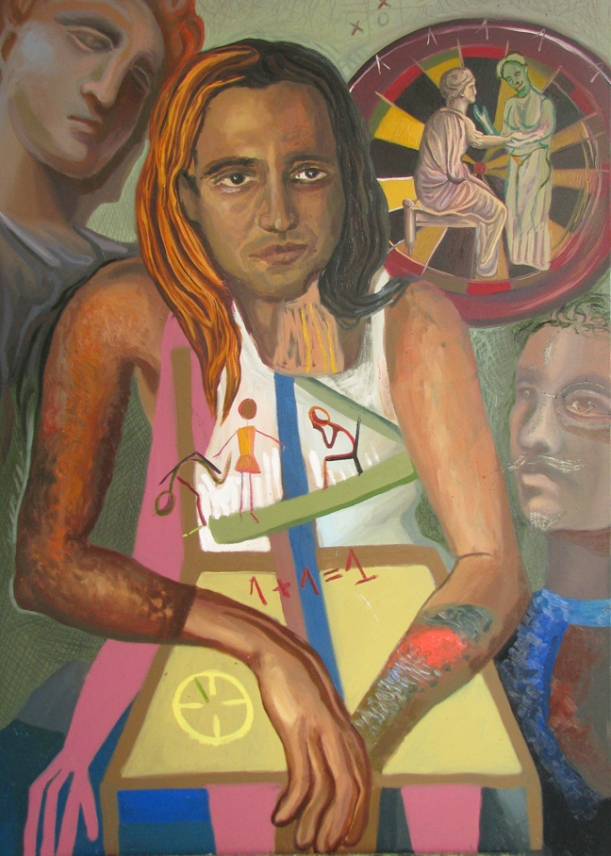 In the following posts I will upload more paintings from the “LUDUS” series. Stay tuned and let me know what you think !

Also, as some of you might have seen, yesterday I tried to upload a sort of interview form, in order to start promoting artists that I like. It didn’t work, but I’ll fix it asap.

“The Thought of Lady M.” was realised in February 2012. I used a mixed technique, combining washable pastels, acrylics, oil colours, paper, wool, thread, all on a 80 x 60 cm canvas. It is available for sale at the price of 230 EUR(shipping not included.)

A nocturnal atmosphere, in which each forehead hides a consciousness that cuts and cuts and cuts, like a guillotine blade. Everything exhales complicity and exhaustion. Each character stays silent and keeps hidden under its tongue, a black and wild thought, like a young mouse, a “corpse” who refuses to become word. Therefore, we are, somehow, in a dostoievskian situation, because each person buries behind its mimic a fault which does not fit elsewhere than in unspoken thoughts …
There is one character in the painting who knows that any guilty man plays with the snakes, with some snakes that only he can see. Guess who is it?

<<In what concerns the “Germination” series – beyond the almost premonitory sensitive character of the line, and the wild effect of carnal architecture in decay–, what especially attracts our attention is Maia Oprea’s capacity to maintain irreconcilable painting styles in proportion of structural balance. These are usually looking to exterminate each other when put “face to face”.>>

The “Germination” series is composed of five individual canvases, standing for themselves, which are based on the same inner form. Most important for me has been to reach the climax of the fight given to create, at the same time: a possible modular structure that could be perpetuated indefinitely and a sequence in which these so-called modules remain completely embedded in the whole that contains them, without their independence being affected. 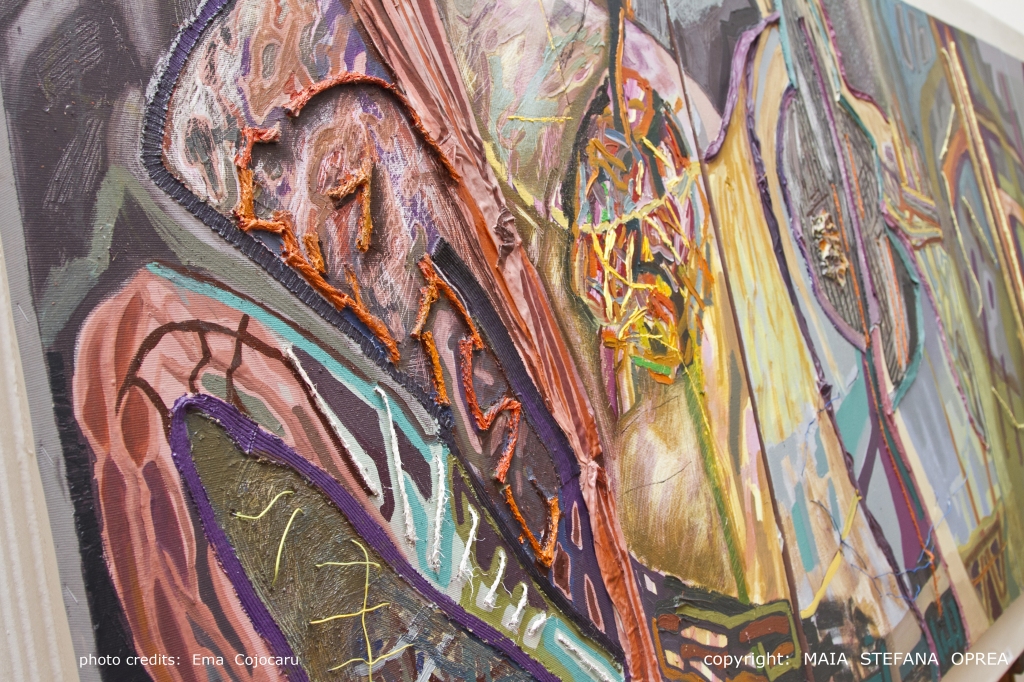 The current set is the result of a fiery war –which I attended as an active spectator – and the countless transformations occurring during work. What I had initially proposed myself was almost meant not to reach a purpose, and not infrequently I was afraid that if I add anything else, the canvas will be destroyed. 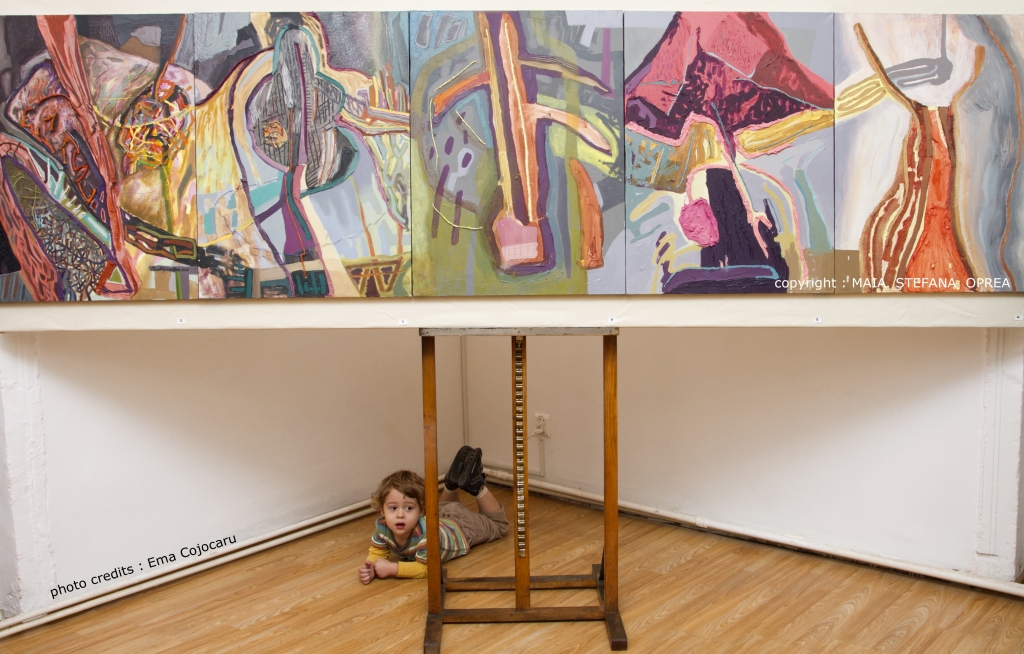 <<With a stunning character of the touch, the “Boiling” series throws the eye into full autopsy. In the depth, the colour freezes; on the surface, it burns. The dominant sensation: that you are retracing the abstract movement of a blade, that you are looking straight in the innards of colours – hot, swollen, nocturnal. No, we are not talking about an expressionist projection, but of a carnivorous fascination towards the form.>> (L.G.S)

The “Boiling” series is composed of four individual canvases, standing for themselves, which are based on the same inner form. Most important for me has been to reach the climax of the fight given to create, at the same time: a possible modular structure that could be perpetuated indefinitely and a sequence in which these so-called modules remain completely embedded in the whole that contains them, without their independence being affected.

The ‘Boiling’ paintings are created in a personal technique, which combines oil colours with other materials, such as rope, wire, light wood, clothes and other diverse textiles. The following photographs should give an idea of the 3-dimensionality of the paintings’ surface.

The current set is the result of a fiery war –which I attended as an active spectator – and the countless transformations occurring during work. What I had initially proposed myself was almost meant not to reach a purpose, and not infrequently I was afraid that if I add anything else, the canvas will be destroyed.